From a recent AAAS member spotlight on Alan Alda. It continues:

Today, the Alda Center has thus far trained some 20,000 scientists and medical professionals around the world to share science in a clear, engaging and accessible manner.

Periodically a song from “The Greatest Showman” is on my mental background music.

I just noticed my brain had substituted for “anthem”:

Dear Self: Remember periodically to reread Dorothy Bishop’s (@DeevyBee) recent reflection on humility and choosing battles, “Why I am not engaging with the Reading Wars”.

Huh! Quite OK Image compression provides a simple fast algorithm and format that seems to benchmark well.  Encodes the next pixel as either run-length, small diffs, or recently-seen.

Headlines about the death of theory are philosopher clickbait. Fortunately Laura Spinney’s article is more self-aware than the headline:

Forget Facebook for a moment. Image classification is the undisputed success of black-box AI: we don’t know how to write a program to recognize cats, but we can train a neural net on lots of picture and “automate the ineffable”.

But we’ve had theory-less ways to recognize cat images for millions of years. Heck, we have recorded images of cats from thousands of years ago. Automating the ineffable, in Kozyrkov’s lovely phrase, is unspeakably cool, but it has no bearing on the death of theory. It just lets machines do theory-free what we’ve been doing theory-free already.

The problem with black boxes is supposedly that we don’t understand what they’re doing. Hence DARPA’s “Third Wave” of Explainable AI. Kozyrkov thinks testing is better than explaining - after all we trust humans and they can’t explain what they’re doing.

I’m more with DARPA than Kozyrkov here: explainable is important because it tells us how to anticipate failure. We trust inexplicable humans because we basically understand their failure modes. We’re limited, but not fragile.

But theory doesn’t mean understanding anyway. That cat got out of the bag with quantum mechanics. Ahem.

Apparently the whole of quantum theory follows from startlingly simple assumptions about information. That makes for a fascinating new Argument from Design, with the twist that the universe was designed for non-humans, because humans neither grasp the theory nor the world it describes. Most of us don’t understand quantum. Well maybe Feynman, though even he suggested he might not really understand.

Though Feynman and others seem happy to be instrumentalist about theory. Maybe derivability is enough. It is a kind of understanding, and we might grant that to quantum.

But then why not grant it to black-box AI? Just because the final thing is a pile of linear algebra rather than a few differential equations?

I think it was Wheeler or Penrose – one of those types anyway – who imagined we met clearly advanced aliens who also seemed to have answered most of our open mathematical questions.

And then imagined our disappointment when we discovered that their highly practical proofs amounted to using fast computers to show they held for all numbers tried so far. However large that bound was, we should be rightly disappointed by their lack of ambition and rigor.

Theory-free is science-free. A colleague (Richard de Rozario) opined that “theory-free science” is a category error. It confuses science with prediction, when science is also the framework where we test predictions, and the error-correction system for generating theories.

Back to the article

Three examples from the article:

Machines can predict better than professionals.

Certainly. Since the 1970s when Meehl showed that simple linear regressions could outpredict psychiatrists, clinicians, and other professionals. In later work he showed they could do that even if the parameters were random.

I admire Tom Griffiths, and any work he does. He’s one of the top cognitive scientists around, and using neural nets to probe the gaps in prospect theory is clever; whether it yield epicycles or breakthroughs it should advance the field.

He’s right that more data means you can support more epicycles. But basic insights Wallace’s MML remain: if the sum of your theory + data is not smaller than the data, you don’t have an explanation.

AlphaFold’s jumping-off point was the ability of human gamers to out-fold traditional models. The gamers intuitively discovered patterns – though they couldn’t fully articulate them. So this was just another case of automating the ineffable.

But the deep nets that do this are still fragile – they fail in surprising ways that humans don’t, and they are subject to bizarre hacks, because their ineffable theory just isn’t strong enough. Not yet anyway.

So we see that while half of success of Deep Nets is Moore’s law and Thank God for Gamers, the other half is tricks to regularize the model.

That is, to reduce its flexibility.

I daresay, to push it towards theory.

Marvel’s The Eternals is not my favorite, but I’m liking it a bit more after Film Theory linked the plot to Thanos – and gave the first plausible Thanos redemption I’ve heard.

Deborah Mayo has a new post on Model Testing and p-values vs. posteriors.

I haven’t read Bickel, but now want to. So thanks for the alert.

Fisher is surely right about facetiously adopting extreme priors – a “million to one” prior shouldn’t happen without some equivalent of a million experiences, and a “model check” on the priors makes sense if you want more than a hypothetical.

But surely, his paragraph about “not capable of finding expression in any calculation” is rhetorical fluff amounting you “you have the wrong model”. If priors are plucked from the air, they can be airily dismissed.

On this note I find his switch to parapsychology puzzling (follow her link to pp. 42-44). His Pleiades example shows that their unlikely clustering makes it hard to accept randomness despite the posterior odds still favoring randomness by 30:1. I think he is arguing that the sheer weight of evidence makes us doubt our prior assumption. And rightly so – how confident were we of that million:1 guesstimate anyway?

But his parapsychology example seems to make the opposite point. Here we (correctly) stick to our prior skepticism, and explain away the surprising results as fabrications, mistakes, etc. Here our prior is informed by many things including a century of failed parapsychology experiments – or more precisely a pattern of promising results falling apart under scrutiny. Like prospects for a new cancer drug, we expect it to let us down.

I like to think that “simple” Bayesian inference over all computable models wouldn’t suffer this problem, because all model classes are included. This being intractable, we typically calculate posteriors inside small convenient model families. If things look very wrong, hopefully we remember we may just have the wrong model. Though probably not before adding some epicycles.

So this Philosophy Stackexchange answer by bobflux has me thinking, even as I’m about to get my booster shot. It’s long, but well-argued.

Intuition: Antibiotic resistance means you must finish your whole prescription so you kill the whole population, instead of just selecting for resistant ones. There is a similar concern with leaky vaccines.

My short summary, in table form plus three notes:

Expanding on those three paths:

I’m happily on the annual-flu-shot train, esp. on the hope that by the time I’m 70 and need it, my system will have seen a lot of variants. Also, I haven’t heard any worries about breeding more resistant flu. I’ve been assuming for awhile that COVID would follow the common-cold path of becoming prevalent and mild, at worst flu-like with annual vaccines. And given that it’s impossible to avoid exposure, it seems better to get side effects of the spike protein rather than infection effects of the live virus.

Now twice in the last week I’ve come across the 2015 paper about the Marek experiment and am thinking about the evolutionary dynamics, and monocultures. How to tell what path we are on? When is it better to Stoically accept the current infections to spare future generations?

More immediately, should I go through with the booster shot? (Given it’s scheduled for tomorrow, that’s the default and most likely outcome. But I am wondering. )

Janelle Shane asks GPT-3 what else besides water to bring on a hike. More here 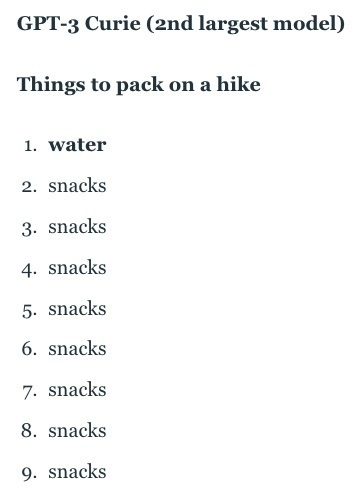 Dashboards are the opposite. They’re often data, looking for a problem.

Like so many of his interviews, this with McChrystal looks fascinating.

I found the beginning of the Srinivasan interview painful, but it improved later. I enjoyed Sullivan’s take on UK vs US. And I’m halfway through the rivetting discussion with Tufecki on COVID-19 response.

Good essay. I did not know the tragic Aaron Swartz story.

This struck me too:

Perhaps the KGB would have enjoyed a better reputation if they had merely charged astronomical sums for copies of Solzhenitsyn.

Seems to me that claiming it’s “illegal and unconstitutional” to vax soldiers weakens an otherwise strong case that infection should count as vaccination. Military Times Esp. given promising Israeli data.

The mouseover for reviews on “Trusted [hah] Consumer Reviews”:

Voice for compassionate harm reduction “when truth itself has supply-chain problems.”

In the last couple of years I’ve discovered both Conversations with Tyler and Sullivan’s (new) blog. So I’m looking forward to Tyler’s convo with Sullivan. This is 5-10x more dramatic than I thought.

This doesn’t seem to change much if you zoom in to recent months. On the narrow point, there are risk-benefit analyses – like Peter Godfrey Smith on lockdowns – but like Jacobs and contra Dougherty, that’s not most of what I see. Dougherty seems better on sources of fear.